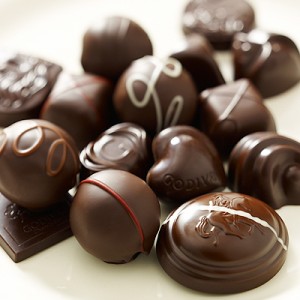 History of Belgian Chocolate
To introduce you to the history of Belgian chocolate we have to go back to the XVIIth century when Belgium was ruled by the Spanish, whose explorers had brought cocoa from South America. At that time, cocoa was a luxury drink only for the royals and artists who visited the royal courts in Brussels. In 1857, Jean Neuhaus had opened the first chocolate shop. It was a pharmaceutical sweets shop in Brussels, where the bars of bitter chocolate were also sold. About 60 years later Neuhaus’ grandchild invented the pralines – empty chocolate shells with sweet fillings. These Belgian chocolate pralines can contain many different creams and nougats, flavored with fruit, different chocolates, coffee, nuts, and more. Neuhaus had little competition since few other confectionary makers could keep up with the complicated flavors he created. Many of the great Belgian chocolate producers currently in business are famous for making gourmet pralines from Neuhaus to Godiva.

More about Belgian Chocolate
There are two the most important things what makes Belgian Chocolate so special – it is the highest quality of ingredients and the accurate following of old techniques using original equipment. Most Belgian chocolate, even in today’s mass production times, is still made by hand in small manufactures.